California Pacific Airlines has announced that it will begin commercial operations this November starting with three destinations. The airline is based out of McClellan-Palomar Airport in Carlsbad, California (CLD) and will serve San Jose (SJC) with daily flights, will fly to Reno-Lake Tahoe (RNO) four times a week, and Las Vegas (LAS) three times per week. The airline has said if the first routes are successful that it would like to expand into Cabo San Lucas, Mexico and Phoenix.

The idea for California Pacific Airlines was started by 89-year-old Ted Vallas in 2009. Vallas is a San Diego County businessperson who had previously operated Air Resorts Airlines. Vallas started the new idea wanting to create an airline based in San Diego County.

The initial idea was started with $14 million of Vallas’s money with plans to raise an additional $32 million from private investment.

Carlsbad-Palomar Airlines was issued a preliminary show cause order to approve the required interstate certificate authority by the Department of Transportation in 2011. The airline’s application for Part 121 certification was also accepted by the Federal Aviation Administration (FAA) in 2011.

California Pacific leased a 72-seat Embraer 170 in July 2012. However, in November 2013 the FAA advised the startup airline that it would be sometime into 2014 before the agency could complete review of the revised application and allow the airline to begin revenue operations. Soon after this announcement the airline furloughed its employees and returned the leased aircraft.

Getting Off the Ground With Purchase of Aerodynamics, Inc 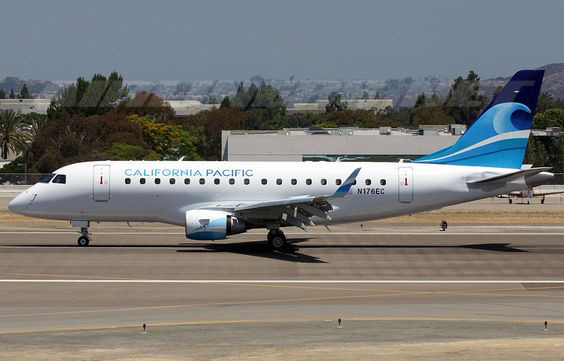 “It’s a turn-key operation,” said Vallas of the acquisition. “We could fly today if we wanted to.” The purchase of the airline allowed California Pacific Airlines to obtain the needed FAA certificate and also a fleet of five Embraer ERJ-145 aircraft.

The Department of Transportation announced in May 2018 that it recommended the new combined airline for renewal of the Essential Air Service program in Denver.

California Pacific Airlines has said it plans to operate the ERJ-145 aircraft in a 44 seat configuration. The airline has options to purchase two Embraer 170s at a later date.

Still An Unsure Path Ahead

Launching a new airline is a daunting task, with many new airline attempts struggling to turn a profit. California Pacific Airlines is entering an increasingly competitive landscape and is also entering at a time of fuel cost increases while operating an aircraft type that isn’t as fuel efficient as competitor’s airplanes. Compounding the difficulty is that existing airlines rarely allow new entrants into their markets without a fight.

California Pacific Airlines will need to maintain a close look on its prices as it seeks to make inroads in the market. The airline has noticeably higher prices on its routes than competitors Southwest Airlines and Spirit Airlines that provide service on the same routes. The startup airline is hoping the price difference will be made up by allowing passengers to fly from Carlsbad rather than San Diego.

“We spent a lot of time studying the fare offerings out of San Diego,” said chief operating officer Mickey Bowman. “We feel that the conveniences offered out of Carlsbad, in particular, justify a little bit of a premium.” California Pacific Airlines has said it will also offer heightened amenities compared to its competitors.

Pilot Jobs At a Startup Airlines

Getting in on the ground floor with a startup airline is a high risk high reward scenario for pilots. The risks entail:

Benefits of entering on the ground floor of a successful airline startup include:

California Pacific Airlines is advertising job openings for pilots, both for captains and first officers. The listed openings are for their Carlsbad, CA, Denver, CO, and Kennesaw, GA locations.