Delta Air Lines has announced that it will extend its orders for the Airbus A220 by 15 additional airplanes. The change means that Delta will eventually take delivery of 90 A220s.

In addition to the additional airplanes Delta has also said that it will be changing the mix of variants of the A220 it will be taking delivery of. The airline previously had orders only for the smaller -100 variant, which seats 109 passengers.

It is planned that Delta Air Lines will take delivery of all Airbus A220s by the end of 2023.

“These additional A220 aircraft will continue to strategically enable Delta to refresh our fleet, drive further advances in the customer experience and serve as an excellent investment for our customers, employees and shareowners for Delta into the next decade,” said Gil West, Delta’s Chief Operating Officer. “We look forward to taking our first A220-300 in 2020 at the Airbus assembly facility in Mobile, Alabama.”

Delta has already taken delivery of their first A220 and is planning the first revenue flight in service for it to take place at the end of January.

Delta Air Lines is undertaking a narrow body fleet modernization to replace less efficient airplanes with newer airplanes. In their narrow body fleet the carrier will be taking deliveries of B737-900ERs, Airbus A321 and A321neo’s, as well as the smaller A220s.

Airbus A220 Is a Unique Class of Airplane

The Airbus A220 defines its own class due to its unique combination of size, range, and operating cost. Though the airplane is a smaller narrow body airliner it is capable of flying up to 3,300 nm.

The A220 is 2,500 lighter than comparable conventional airplanes due to the use of weight saving aluminum-lithium for the fuselage and resin-transfer-infused carbon fiber for the wing.

The Airbus A220 is the first airliner to use the Pratt & Whitney PW1500G geared turbofan which features a large diameter fan that turns slower due to a 3:1 reduction gearbox between the turbine engine core and fan.

The airplanes interior is 2 by 3 seating wide in economy class with cabin noise being among the lowest in the industry.

“Delta has always been deeply focused on the passenger experience, and the A220 fits perfectly with that philosophy,” said Christian Scherer, Airbus Chief Commercial Officer. “You just need to take a look at Delta’s cabin on the A220 to see it’s setting a new standard in short-haul flying. The A220 will provide passengers with a level of comfort and convenience that makes flying a pleasure again, while meeting Delta’s high standards for efficiency and reliability.” 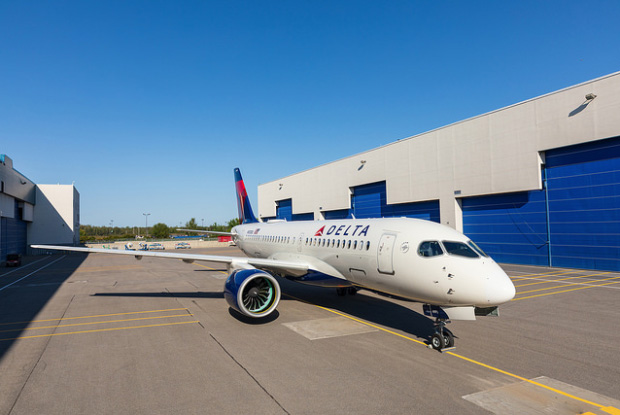 Even though the A220 is an exciting new airplane it will likely be available to junior pilots. Aircraft type is determined by a bidding system where senior pilots get first pick and it then trickles down in choices through the seniority system until all pilots are assigned an airplane type.

The A220 is a smaller narrow body and has a lower pay scale than other airplanes in Delta’s fleet.

The A220 has the capability to fly longer routes, however, Delta’s initial plans show them not using the airplane’s range capacity. Time will tell how the airplane eventually fits into the airlines route structure.