Pilot Shortage is a common phrase at the moment. The huge pilot demand predicted by Boeing and Airbus has been shared across the industry and to would-be pilots with proclamations that ‘now is the best time to become a pilot.’

Some say the shortage is a myth - that employers are incentivized to attract more pilots into the industry to give the employers the leverage to suppress pilot wages. But the numbers can’t be argued with: airline fleets are expanding at an unprecedented pace to meet the demands of growing world economies, and projections show that at the current rate of pilots entering the profession that there won’t be enough pilots to fly them.

But after diving into the numbers the shortage isn’t as straightforward.

CAE Forecasts that the airline industry will need 255,000 new pilots over the next 10 years. 60% of these pilots are needed for growth and 40% are needed for mandatory retirements and other attrition.

Airlines are operating airplanes today at high load factors and utilization rates to maximize profits. The International Air Transport Association (IATA) forecasts 4.2% annual passenger growth and an increase of an additional 1.6 billion passengers flown over the next ten years. 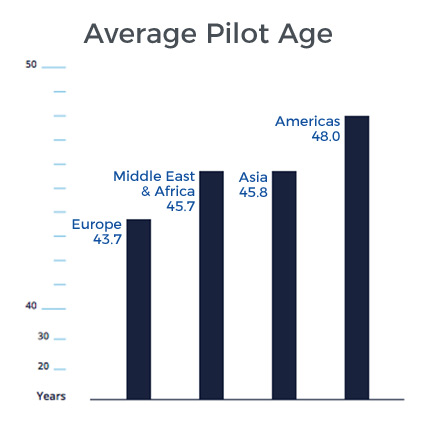 Most countries mandate a retirement age of 65 for airline pilots. Pilots could also leave an airline for early retirement, pursuit of another career, or loss of medical certification.

When experienced senior pilots retire it causes a chain of pilot upgrades to fill positions. For example, when a senior wide body captain retires this creates the need to upgrade a first officer - which will typically be a senior first officer in a wide body airplane. This will then cause pilots further down in equipment to upgrade to fill the first officer’s vacated position. This chain can potentially extend downward pretty far.

All airliners operating today require at least one captain and one additional second pilot, either another captain or a first officer. In recent years airlines have improved efficiency by increasing aircraft utilization which has led to a slight increase in crew staffing ratio.

19 to 100 seat airplanes used primarily to feed traffic from smaller markets into hubs and to fly shorter point-to-point legs. Regional airplanes typically fly 30 minute to 2 hour legs and rarely operate through the night. Average regional airline staffing is at a 10 pilots to 1 airplane ratio.

100 to 220 seat airplanes which are found in high numbers both at large network carriers and low cost carriers. Typically used on flight legs up to six hours and are often used on ‘red eye’ flights. Narrow-body jets are about 55% of airline fleets but are expected to increase to 60% of total airline fleets in the next 10 years. Average narrow-body staffing is a 11 pilots to 1 airplane ratio.

220+ seat airplanes with more than 1 aisle. Primarily used for longer-range domestic and international operations. Newer wide-body airplanes can easily fly legs longer than 15 hours and require the use of relief flight crew. Average wide-body staffing is a 16 pilots to 1 airplane ratio. 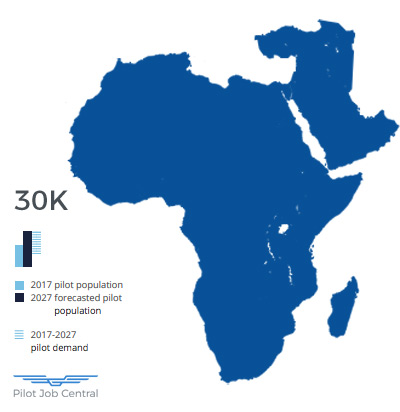 The Middle East includes the Gulf region. Countries here have seen aggressive growth among their aviation employers. Middle eastern carriers have often staffed through hiring expatriate pilots. Middle eastern carriers have begun focusing on creating training academies or partnerships with professional academies to build out their own programs for local pilot development.

Africa is the world’s smallest air travel region though still relies on air transport . Some countries in Africa have seen steady economic growth and have been attempting to recruit pilots for their operations. These carriers can be a good opportunity for low-hour pilots seeking direct-entry into a range of airplane types.

Europe is expecting slower aviation growth due to geopolitical uncertainties, such as the departure of the United Kingdom from the European Union, as well as lower economic growth in some countries. 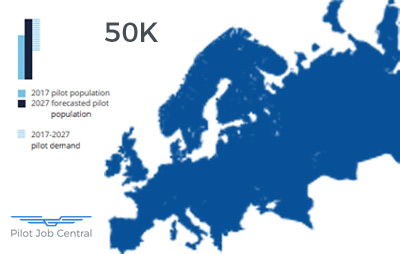 Most European countries hire new pilots directly from cadet training programs so don’t have pilot pipeline supply issues seen in other countries. However, the fast growth of the LCC airlines has caused them to pursue other recruiting options. 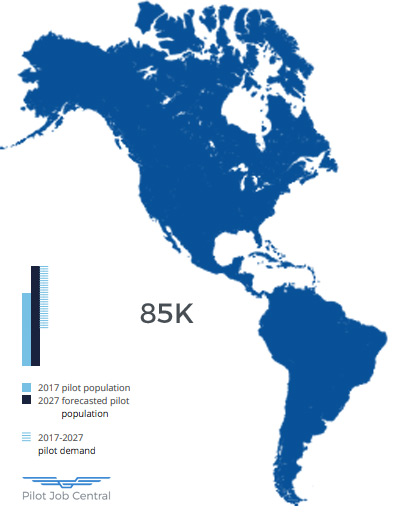 Americas region includes United States, Canada, and emerging aviation markets in Central and South America as well as the Caribbean.

The United States is the world’s largest air travel market due to large populations, strong economies, and liberalized airline industries. The last 9 years in the United States have been profitable due to low fuel prices, high yields and load factors, and industry consolidation. The profits are helping to fuel United States aviation growth.

Pockets of healthy aviation growth in Latin America will have positive effect on pilot demand. The Americas will have the most pilot retirements over the next 10 years.

China and India in particular have a large, and growing, middle class. Both countries have the potential for their airline sectors to grow significantly with the relaxing of regulations and new investments in airports and air traffic control systems.

Asia-Pacific based airlines were once limited service to major Asia-Pacific cities, but international airline service is now being extended to secondary and tertiary cities.

It is common for pilot employers in this region to hire experienced expat pilots as contractors. These pilots not only crew the operations but are also helping local pilots learn and develop. Aviation employers from this region are creating training programs in an attempt to build long-term programs to staff their operations from local pilots. 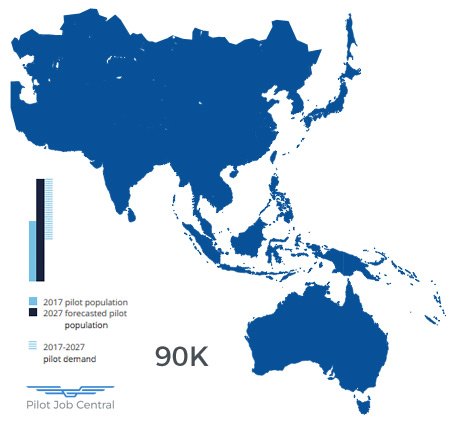 Where Are Airline Pilots Coming From

Flight Training Academies that focus on training pilots for airline flying are producing an increasing proportion of the pilots staffing today’s commercial airlines. Other sources of airline pilots include:

Almost 10% of Airline Pilots in Asia-Pacific Region Are Expatriates

Airlines in regions of rapid growth are challenged with limited supply of experienced pilots in their areas. These operators will focus on accelerating the development of junior first officers, which can take some time. They will also hire experienced pilots from regions with mature airline markets.

Airlines employing expatriate pilots primarily use compensation to lure them from their home markets. They can sometimes provide tax relief incentives compared for these pilots as well. 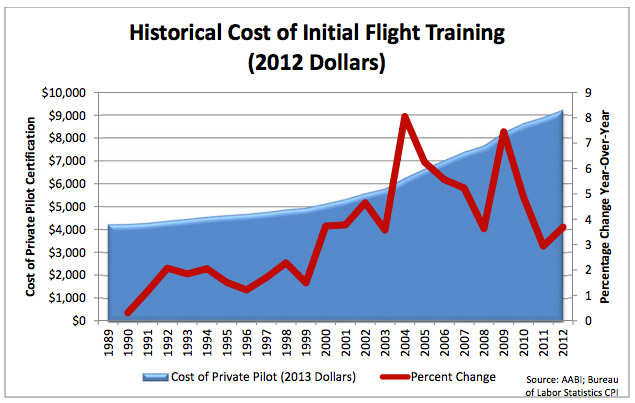 A major factor in driving people away from considering a pilot career is the cost of flight training. As the military training path to the major airlines transitioned to more of a civilian path the cost has shifted to the civilian-trained pilots. Flight training costs have escalated and are now very significant.

In order to cover training costs, many pilots are now resorting financing. Unfortunately, most entry level pilot jobs do not pay well and after factoring in repayment on the flight training loans a pilot career becomes financially unfeasible for many.

Interest in the Career is Waining

Greg Muccio, a senior manager at Southwest Airlines Co. said to Bloomberg “That is one of the things in my job I get to worry about every day and when I go to bed at night. The biggest problem is a general lack of interest in folks pursuing this as a career anymore. That’s what puts us in the most jeopardy.”

A study released by North Dakota and the University of Nebraska-Omaha found that a smaller number of newly created flight instructors is interested in a career as an airline pilot.

Over the last decade many pilots have left the industry due to a few factors:

The major airlines, the carriers most people are familiar with - American, United, Southwest, Alaska, JetBlue, etc. - are not experiencing a shortage of pilots. They are able to recruit from regional airlines, the military, and the pool of corporate pilots.