News of the pilot shortage is ever-present right now. Being oft spoken of by employers fearing it and pilots seeking to capitalize on the shortage. The growing issue is even taking more of the stage with popular media outlets.

But those counting on the unbridled optimism of a long-time run-up in pilot hiring need to temper their expectations. Shortages have been predicted in the past – with a few even starting to emerge. But outside factors have derailed some of these hiring booms just as they started ramping up.

What are some factors that you need to be aware of as you watch the pilot job market and plan for your career growth?

Planned airplane fleet growth is among the most reliable factors for gauging future pilot jobs. As an operator grows their fleet they must increase their pilot staffing a commensurate amount.

When an operation commits to new airplanes there is significant financial incentives placed in the contract for the operator to keep their commitment. The major airplane manufacturers are booked out so far in advance that they have significant leverage in tying operators to their orders.

If a pilot employer later needs to ground airplanes due to market conditions they will usually do so from among the older airplanes they no longer have financed rather than new airplane types.

When looking at the airplane orders of a potential employer be mindful of the plans the employer has for those airplanes. Many new orders will be entering fleets to replace aging aircraft. Try to get a picture of the net airplane growth to learn whether that employer is planning additional pilots to staff a growing fleet.

In their most recent Commercial Market Outlook Boeing analysts project a global need for 44,040 airplane deliveries from 2019 to 2038. A few key points from their analysis:

Pilots that have entered the job market in recent years have only known working in a positive economy. But as is common knowledge, the economy goes in cycles. There is significant debate and conjecture around when the next recession may occur.

But what we do know is that aviation amplifies economic conditions. The highs are higher and the lows are lower than what most other sectors in the economy experience. When a recession does occur the demand for pilots will decrease significantly.

The other factors influencing the supply/demand of pilots in the job market may have a larger impact on employer’s needs to hire pilots compared to just economic pressures than what has occurred in the past. It is difficult to say whether an economic downturn will cause as significant of pilot layoffs as they have in the past.

Fuel is among the largest costs for airplane operators. Pilot employer’s financial health is tied closely to the price of fuel. When fuel prices soar employers turn towards layoffs as they attempt to balance financial sheets.

Oil prices reach record highs in 2008 and many pilot employers laid off employees as a result. Oil prices have not returned to the highs experienced in the runup in 2008 and airplane operations have not had to reduce staff due to fuel prices since then.

Many airplane operators have implemented measures to smooth out the impact of swings in fuel prices such as fuel hedging, fleet planning for higher efficiency airplanes, and creating more fuel efficient flight profiles and flight planning. Delta Air Lines even went so far as to purchase an oil refinery.

There is a bubble of mandatory retirements nearing. The FAA adjusted for this in 2009 by increasing mandatory retirement age from 60 to 65 years old. This only delayed the issue. It is anticipated that U.S. airlines will have to replace 30,000 retiring pilots by 2026.

Mandatory retirements is another reliable indicator of pilot hiring needs as pilot employers have no option to prevent them from happening. Pilot retirements are also a good planning metric as they indicate upward advancement in seniority. 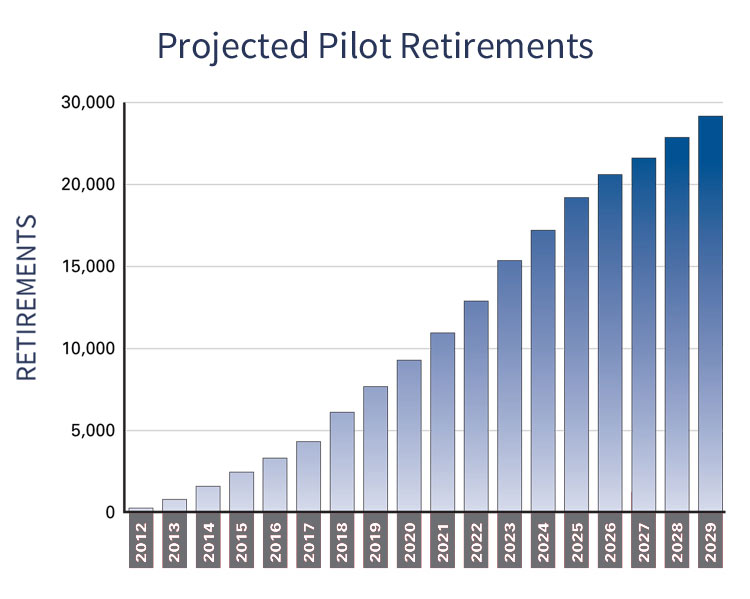 Be aware of pending changes in aviation regulations as they will have a noticeable impact in the pilot job market. When the mandatory retirement age was increased from 60 to 65 years old this significantly slowed career advancement for pilots .

The Airline Safety and Federal Aviation Administration Act of 2010 has had mostly a positive impact on the pilot job market. Duty and rest requirement changes from the act made it so that most part 121 carriers had to increase staffing by 5% to 8%. And the change in requirements so that regional airline first officers have to have an Airline Transport Pilot Rating (ATP) from the act has had a profound impact on the pilot hiring pipeline.

In the past few decades large airplane operations have been able to steadily increase the utilization rates of their airplanes. That is, the airplanes in service now are flying more each day than what they have done in the past. This increase in utilization has increased the number of pilots necessary to staff airplanes.

In the past the generally accepted crew ratio for multi-crew airplanes was 10 pilots on staff for each airplane. This ratio has trended upward in recent years.

Be mindful of operators that are experimenting with increasing utilization rates as this could eventually lead to an increased need for pilots.

Professional pilots should not only be aware of the demand side of the pilot job market but need to also keep tabs on the supply side.

As the pilot shortage deepens the aviation industry will continue to ramp up efforts to attract new would-be pilots into the profession. Messaging around ‘now is a great time to pursue your dream pilot career’ will grow more prevalent and louder.

Due to the ATP requirement mention above the pilot pipeline is elongated compared to what it used to be. That is, it takes more time now for a new pilot to get from just starting until they are able to sit in the right seat of a multi-crew airplane.

A metric to be aware of for monitoring the bottom end of the pipeline is student pilot registration. Many student pilots are not seeking a professional pilot career path. However, keeping an eye on relative trends can show a good indication if there is going to be a spike in available pilots entering the market in coming years.