“In three years, Embraer will be able to deliver new regional jets to U.S. airlines that could significantly reduce their fuel bill. But U.S. airlines may not be able to take them because of restrictions in collective bargaining agreements with pilots. It’s easy to blame pilots for their stance. But they have leverage. Why shouldn’t they use it?”
— Brian Sumers

One new airplane, the Mitsubishi MRJ90, and one new variant, the Embraer E175-E2 will be coming to market soon. Both of these airplanes exceed weight limits established in most legacy airline pilot scope agreements. But U.S. airlines have said the airplane would only work in their cost structure if flown by outsourced regional airline operators.

As pilot labor contracts become negotiable in the next couple years airline managers will likely attempt to amend existing scope protection agreements with pilot unions. They will do so in an attempt to account for new airplanes entering the market and also to address concerns that managers see in their fleet planning and operations.

How We Arrived At Existing Scope Protection

Within a few years of the introduction of the first regional jet the airline industry began realizing the potential of the new airplane types. During this time, major and legacy pilots were content with their existing scope agreement protections which they felt had been sufficient enough to prevent the outsourcing of their work.

Prior to 2005 airlines grew outsourced 50 seat regional fleets at a fast pace. The Bombardier CRJ700 entered service in 2002 but wasn’t common at first due to existing pilot scope agreements preventing which limited outsourced flying to airplanes with 50 seats or less.

After the scope protections the Bombardier CRJ700 and CRJ900 and smaller Embraer E-Jets began to proliferate across across United States regional airlines. 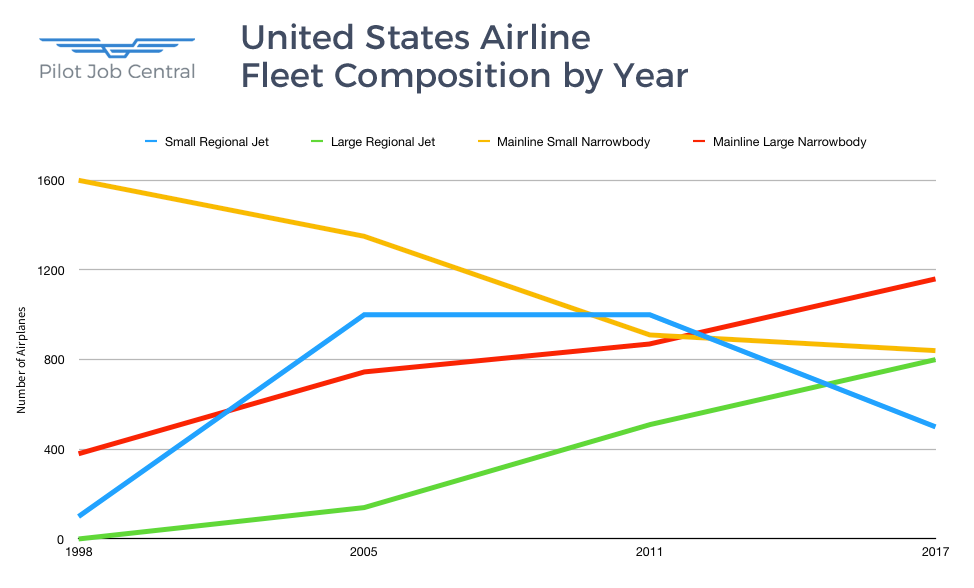 There were originally seven major and legacy airlines that influenced pilot scope agreements. By 2013 only three of the airlines remained. The remaining carriers were again profitable and the mainline pilots had a strong desire to regain lost work.

The new scope agreements have set weight limits for airplanes that can be outsourced to airplanes having a maximum takeoff weight of 86,000 lbs or less. Pilots had become concerned with regional jets increasing in range capability and encroaching on longer legged flights. The weight limit effectively puts a cap on range capabilities for outsourced flying.

Mitsubishi Regional Jet (MRJ) is a family of two new airplanes under development which are powered by Pratt & Whitney geared turbofans. 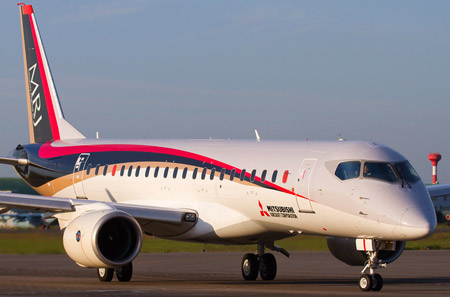 Eddie Jaisaree, head of North America sales for Mitsubishi Aircraft Corp, said of the two airplanes and scope “Our approach with the MRJ family of aircraft (MRJ90 and MRJ70) has always been global and I would say that the MRJ family is perfectly positioned regardless of scope. If it does relax, then U.S. customers can take advantage of the double-digit cost savings offered by the advanced aerodynamics and new technologies of the MRJ90. If it doesn’t relax, the MRJ70 is the only clean sheet design jet that will operate under current scope clause.”

A new variant of the Embraer E175, the E175-E2 will be entering airline operations soon. The E2 variant will be powered by the new Pratt & Whitney geared turbofans. The E175 has been a success with United States regional airlines in recent years. The airplane has a maximum seating capacity higher than 76 but airlines have flown it with 76 seats to keep it within existing pilot agreements. The E175-E2 has a maximum takeoff weight well in excess of the 86,000 lbs limit.

Victor Vieira, head of market strategy at Embraer Commercial Aviation said “Typically, contracts between major carriers and the union last about three years. All majors are set to open contract negotiations with their pilots in 2019 with the subsequent round likely to be in 2022, when the E175-E2 will offer 6% advantage in terms of fuel burn and 20% in terms of maintenance, on both per trip and per seat basis. The most efficient aircraft is actually in all their best interests and the relaxation will happen in that window to make the E175-E2 scope compliant.”

American Airlines has the most generous scope among the legacy carriers. American’s feeder fleet had an average of 290 regional jets with up to 65 seats, and 303 aircraft with 66-76 seats

American Airliners management has not made any recent comments on whether or not they plan to seek scope relief or a change in the definition of a large regional jets.

American had last sought changes to scope protections in 2014 when it wanted to redefine a large regional jet as one with 71-76 seats instead of 66-76 seats. The change would have allowed 81 more 76-seat aircraft.

“If American wants to fly more large regional jets, we’ll be happy to fly them at the mainline,” says the Allied Pilots Association, adding that scope concessions are a non-starter for the union.

Executives at Delta have said whether they plan to seek more 76-seat jets or change scope limits in the next round of negotiations.

But in information presented to investors Delta has said it plans to reduce by 2023 the number of domestic seat departures on regional jets to roughly 20% – with 2% on small regional jets and 18% on large regional jets. The airline currently has 27% outsourced.

“We will not be looking to grant concessions to [Delta] in any section of our working agreement, including scope, and are presently in protracted JV-related negotiations that involve improving scope protections,” says captain Bill Bartels, chairman of the Delta master executive council at ALPA.

“Our growth really does need more 76-seaters,” said Scott Kirby, president of the Chicago-based carrier, at a financial conference on 14 March.

“United doesn’t need scope relief and has the ability to accomplish our growth strategy today,” said Todd Insler, chairman of the ALPA United master executive council, in a letter to pilots after Kirby’s remarks this month. He pointed to the clause allowing more large regional jets in exchange for a small mainline narrowbody as an example of this.

Read more about why United Pilots are opposing changes to their scope agreements.

Embraer has removed from its backlog an order for 100 E175-E2s from SkyWest Airlines. The terms of the original order have not changed. But the change in backlog is a signal that Embraer anticipates difficulty ahead for airlines in their attempts to alter existing scope agreements.